Here is the history and the meaning to the order of each name.

| In the beginning were Uji and Kabane

Kabane were hereditary titles used with Uji to denote rank and political standing, and for those officially admitted to the imperial court. At first there were more than thirty titles, but eventually they were consolidated into eight, identified singularly as: Yakusa no kabane 八色の姓. The second rank of the eight, Ason 朝臣 was the most popular Kabane given.

Later, as the Uji began to devolve into individual households, the Kabane gradually faded from use. 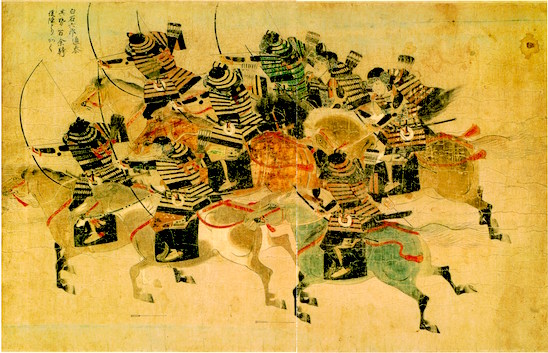 In the late Heian period (794–1185), paternalistic families became more independent, and as such lessened their ties to their wider Uji roots. These families often managed manors called Shōen 荘園; Gun 郡, Gō 郷, and Ho 保, and bestowed the place name on their family name Myōji 名字 in order to protest about land ownership [1]. That is why the majority of Samurai names are deeply connected with the place name.

For example, a famous samurai in the late Kamakura period (1185–1333), Ashikaga Takauji 足利 尊氏 and his rival Nitta Yoshisada 新田 義貞 had different Myōji name, but their Uji name is the same, Minamoto 源. 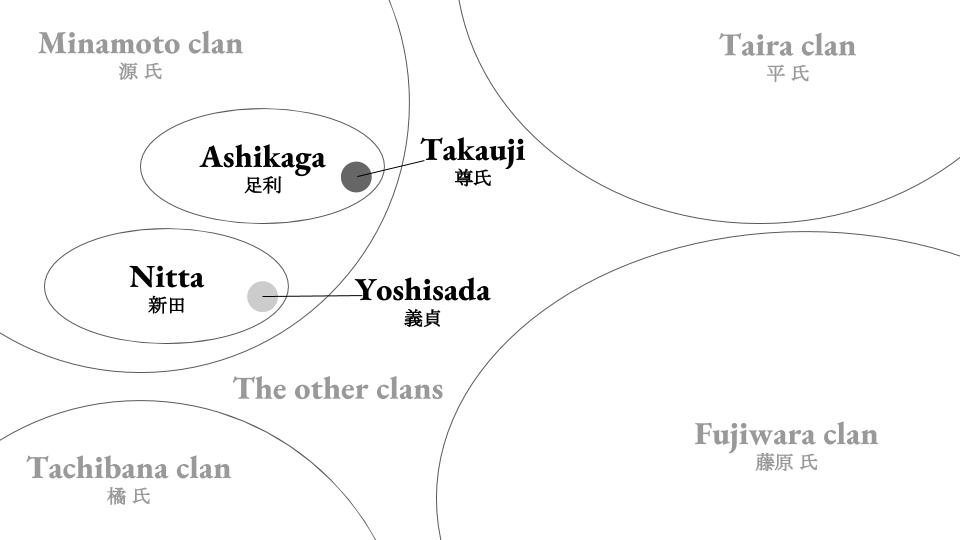 There are other patterns of Myoji that do not stem from the land name. Examples include, a name taken from the local administration system like: Hongo 本郷 and, Jinbo 神保. Other examples are Tsukushi 筑紫 and Rusu 留守 [2], taken from government posts. 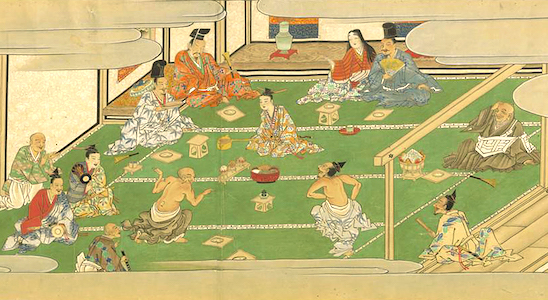 Maru 丸 means a chamberpot, to expel the devils by stench

Hōshi 法師 means monk, being under the protection of Buddha

Jitsumyō 実名 or Imina 諱 is one’s private name, created by themselves, or bestowed at the coming-of-age ceremony. Imina is also described as Imina 忌み名 (directly translated as “the name to avoid” [3]), because it was believed that if someone other than the owner were to know this name, it would give power to that second person – ultimately allowing them to control the person. Imina is thus maintained as a secret to not only guarantee an egregious usage of the name, but to also maintain one’s individual politeness [4].

Samurai publicly called themselves in order from to Myōji and Kemyō. (see below) They paid attention to Imina and changed it casually.

The custom called Henki 偏諱 came about when a lord wished to give one of his kanji characters to one of his retainers (someone attached to a household) as a reward, or urged the changing of an Imina [4]. A samurai changed his Imina over 15 times [5]. Changing the names was normal among the Samurai rank. 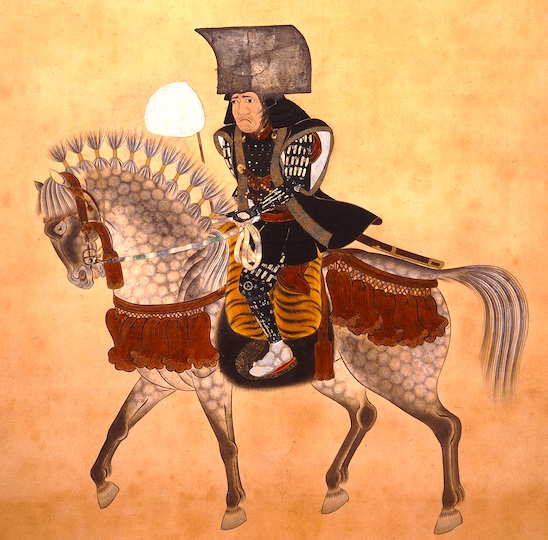 Kemyō is the external name used in place of Imina. They are roughly divided into 4 types:

Zuryōmei 受領名
An unofficial rank given without the authorization of the Imperial court. Daimyōs 大名, the powerful feudal lords during the Sengoku period, gave their vassals Zuryōmei as a reward.

Hyakkanna 百官名
Refers to an official-rank-style name that Samurai called to announce oneself, such a name was often boomed out publicly among the Samurai society. “Sakon 左近” of Shima Sakon 島 左近 is a famous example. 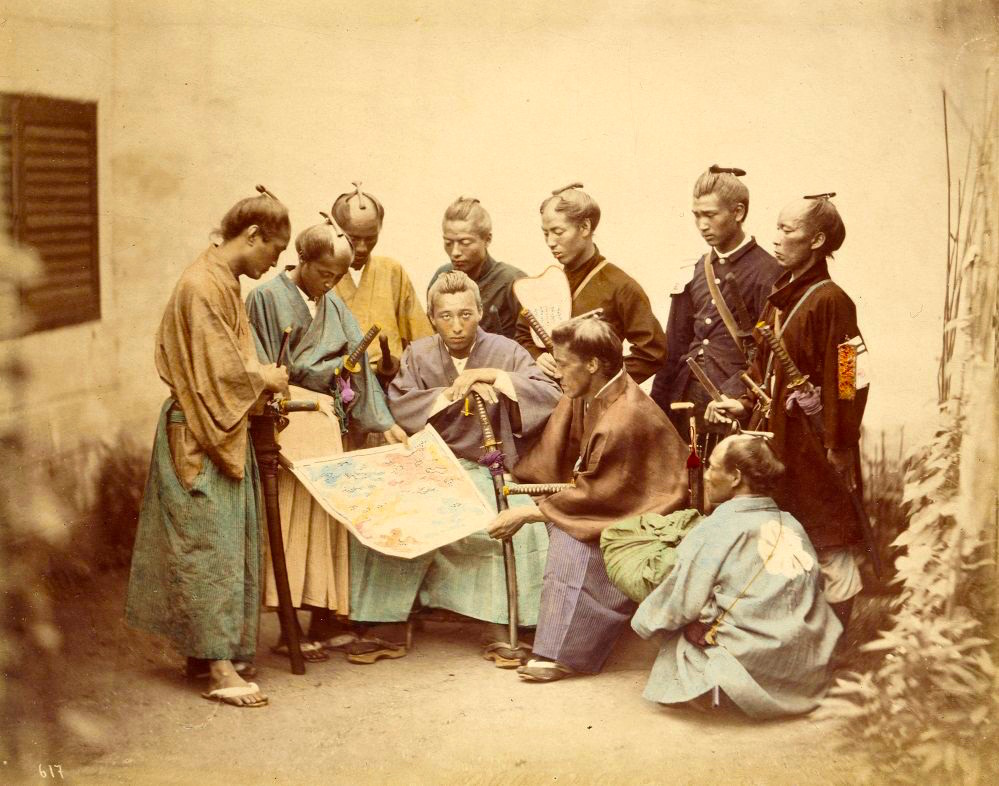 | Names and natures do often agree

There is an old saying that 名は体を表す (Na wa tai wo arawasu), meaning “names and natures do often agree.”

Samurai traditionally had several names like above, and changed their name to fit different situations and life stages. They strove to be true their name, trained diligently in the martial arts, and adopted an appreciation and dedication toward all manner of learning. For a samurai, learning was always done with the very greatest degree of care.

As such, one’s name was the crystal of their principle and consistently served to navigate them to even greater heights.

Each relationship is represented in the following graph. 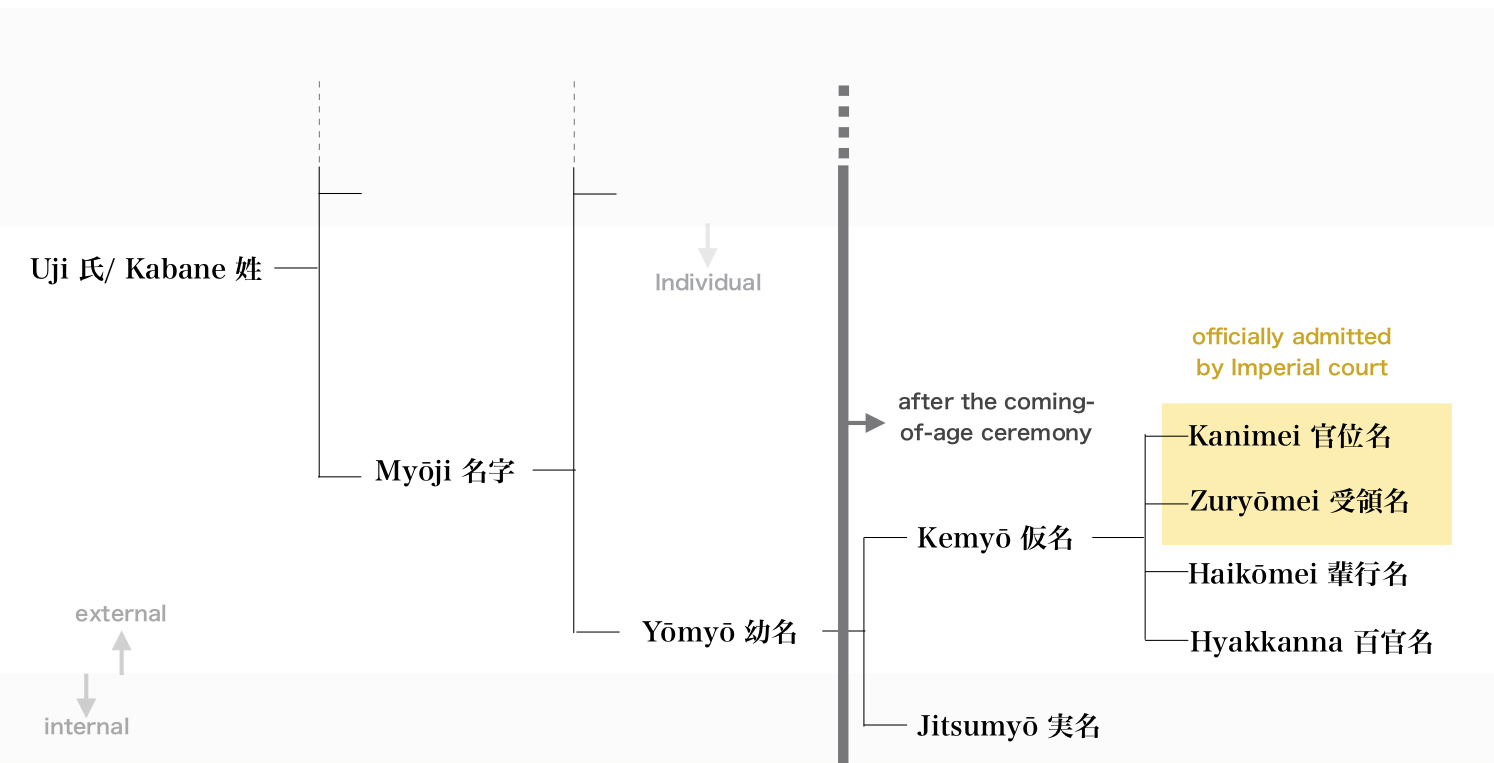