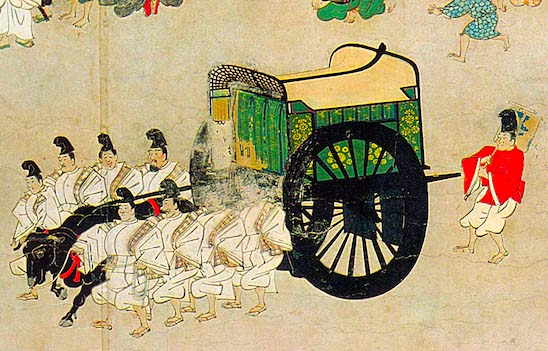 Kamon, or the family crest, began being used in the first half of the 11th century (Heian period). Nobles decorated the sides of their carriages with beautiful symbols to identify themselves when attending the imperial court and scouting out in the fields.

In the beginning, the symbol was used only by one generation of a family but as the society of court nobles grew, the symbol came to be inherited by their children along with hereditary occupations and family ranks. This art eventually evolved into being a family crest. Some famous examples are Mokko-mon 木瓜紋 of Tokudaiji Saneyoshi 徳大寺 実能 and Ume-mon 梅紋 of Sugawara Michizane 菅原道真. 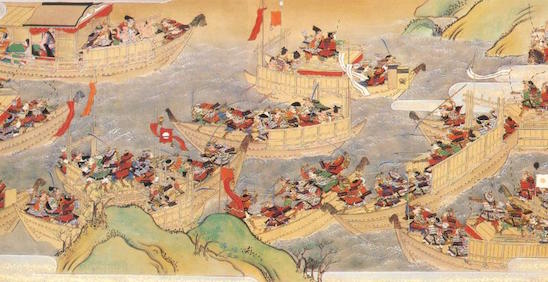 The Kamon of Samurai were created later than the ones of the nobles at the end of the Heian period when the conflict between the Minamoto and Taira clans broke out.

To manifest exploits and to achieve fame on the battlefield, Samurai began to design symbols for their military outfits. During this time Samurai had almost no significant crests of their own. A white flag was used by the Minamoto clan and a red flag was used by the Taira clan [1].

| Designs established on the battlefield

After the Kamakura period opportunities multiplied for Samurai to perform great deeds. The many battles urged them to create their own Kamon and to decorate all manner of objects with it, including curtains called Jinmaku 陣幕, flags called Nobori 幟, sword scabbards called Saya 鞘, etc. The purpose of these symbols was to confirm their achievements and distinguish friend from foe.

During the Nanboku-chō period (1336–1392) Daimon 大紋 were developed from ancient ceremonial court robes called Hitatare 直垂, to which Kamon were sewn. And Daimon became popular among Samurai. The idea to design Kamon on all formal dress spread from the middle of the Muromachi period (1336–1573) when clothes like Suō 素襖 and Kataginu 肩衣 were developed from Daimon. They became quite fashionable. At the same time, Haori 羽織 were also made.

The need of Kamon for military use was increasing and this had significant implications for society at large. By the end of the Muromachi period, Samurai decorated Umajirushi 馬印, fletchings called Etsuru 柄弦, cloaks called Horo 母衣, with Kamon.

In those days, inter-family conflicts were also common. The result was that the number of Kamon used to discern one family faction from another also rapidly increased. 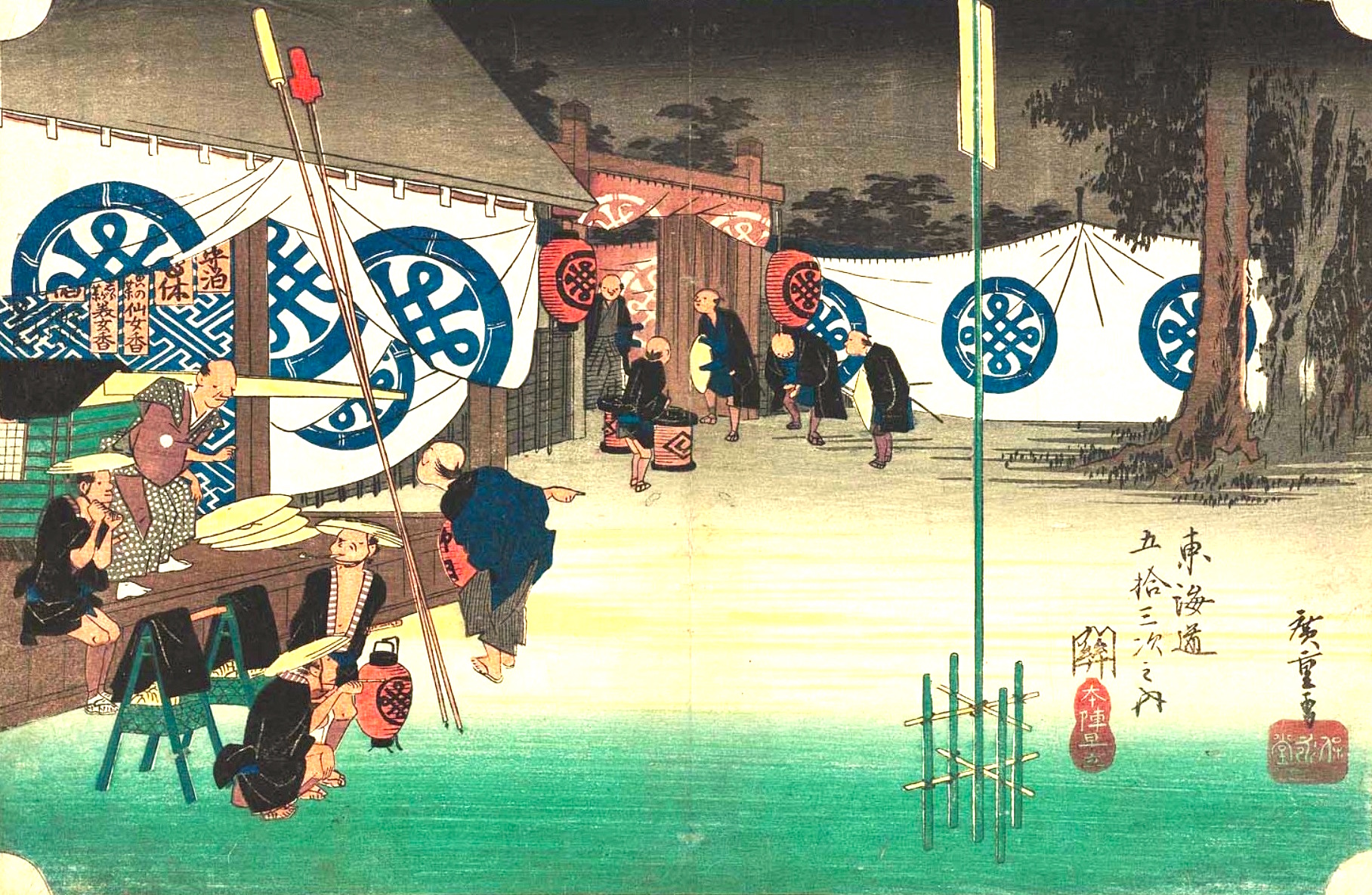 In the Edo period (1603–1868), fierce battles among Samurai practically disappeared, and the role of Kamon was changed from military use to an authorization tool of family rank [3].

Kamon appeared on daily necessities such as foldable fans or Sensu 扇子, Chopsticks or Hashi 箸, lacquerware or Shikki 漆器, paper lanterns known as Chōchin 提灯, oil-paper umbrellas or Wagasa 和傘 and Kimono 着物. With a Kamon the status and class of another samurai was clearly understood.

Daimyō 大名, the feudal lords, and their retainers began to wear Kamishimo 裃 as formal dress, on which Kamon in a circle were placed in three to five positions. 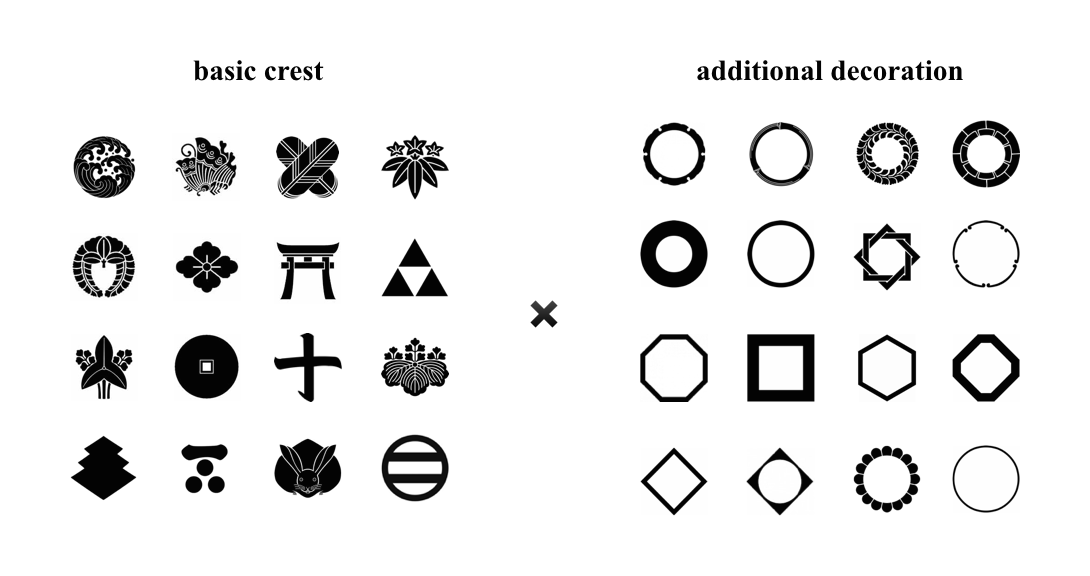 Samurai created their own Kamon just by their favor, symbolized military outfits to pray for good fortune in battle and chosen an auspicious grass and flower to pray for the prosperity of their descendants. Some Kamon are centered and surrounded with an additional decoration like a circle, square, lozenge, snow ring, wheel, etc.

Now Kamon have wide variation with more than 240 basic designs, over 5,000 patterns and around 20,000 figures. With our help you can select a Kamon that best represents your own individual story.