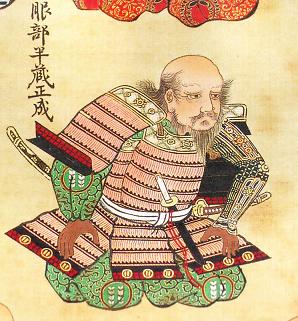 Hattori Hanzo 服部 半蔵 was a famous samurai of the Sengoku period, credited with saving the life of Tokugawa Ieyasu 徳川 家康 and then helping him to become the ruler of united Japan. Today, he is often a subject of varied portrayal in modern popular culture.
There are two types of his name, Hattori Hanzo Masanari 服部 半蔵 正成 and Hattori Iwaminokami Masanari 服部 石見守 正成.

Hanzo
What Hattori in English means? Hattori 服部 is thought a corrupted word of Hataoribe 機織部, the technical group of weaving the cloth. There are several theories about the origin of the Hattori family. The dominant theory is they were a Shinto priest and a local samurai of  Iga Province. Hattori Yasunaga 服部 保長, his father, became a Matsudaira family retainer, Masanari also served the Matudaira family, especially Tokugawa Ieyasu.

半 originally means “half,” or “divide.” In his name, it might be used by the meaning of “judicial.” 蔵, warehouse, was used frequently from the end of the 16th century to show the economical successfulness. In order to wish the son for his prosperity, his father might named Hanzo.

Hanzo
Masanari also used Iwaminokami 石見守, the governor of Iwami Province, as his pseudonym. Iwaminokami is thought Zuryōmei 受領名, an unofficial rank without the authorization of the Imperial court.
Hanzo
Hanzo was a strong samurai commander of foot solders including Iga ninja and Koga ninja, since his family root was deeply connected with Iga Province (described above). Hanzo was famous as “Oni Hanzo 鬼半蔵 (Devil Hanzo)”. Hanzo helped Tokugawa Ieyasu pass through Iga Province with people there when Oda Nobunaga died in the Honno-ji Incident of June 1582 (Igagoe 伊賀越え). In the Edo period, the achievement of “Igagoe” was appreciated, and Iga people were employed by Tokugawa shogunate as a police constable under Hanzo.

The name Hattori Hanzo was inherited for 12 generations.