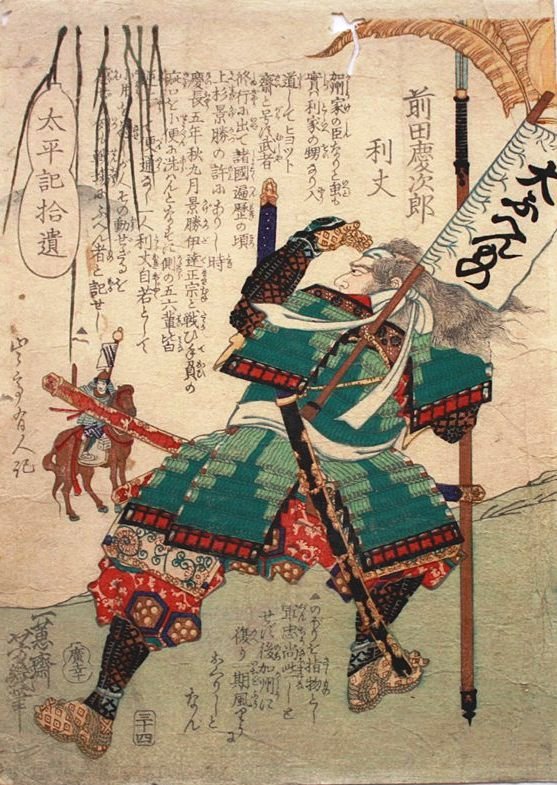 Maeda Keiji is one of the famous samurai for his eccentric behaviors and outlandish style, so-called “Kabukimono 傾奇者”, in the Sengoku period. He was skilled in not only the use of arms but also the culture like the poem and the tea ceremony. He had plenty of anecdotes for his easy-going character. Then the most powerful lords like Toyotomi hideyoshi 豊臣 秀吉, Tokugawa Ieyasu 徳川 家康 and Maeda Toshiie 前田 利家 deeply recognized his skills and personality.

His birth story is unknown in detail. There is no influential evidence who was his real father, just only known a member of the Takigawa family. His childhood name is not also fixed. Sōbē, meaning “a heir boy”, is the most dominant opinion up to now.

After his step father died, around 1590, Keijiro had a disagreement with Toshiie and left the Maeda family. After leaving the family, he took the tonsure, took up his residence in Kyoto, called himself Kokuzōin-Hyottosai 穀蔵院 飄戸斎, meaning “a carefree man near the Imperial Granary”, interacted with a large number of writers such as Furuta Oribe 古田 織部 and enjoyed the training of the poem and the tea ceremony.
Not to use his family name and true name showed the complete separation from the Maeda family. But another Samurai still called him Maeda Keiji. Having gained a reputation for both his military and literary skills, Keiji received many offers from various places to serve as Samurai. Among these offers he contracted a friendship with Naoe Kanetugu 直江 兼続, a famous strategist of the Uesugi family.

He changed his pseudonym and true name from “Keijirō Tosimasu 慶次郎 利益“ to “Keijirō Toshisada 啓次郎 利貞” and served Uesugi Kagekatsu 上杉 景勝, a distinguished Samurai lord fighting with Tokugawa Ieyasu. Kei 啓 of Keijiro 啓次郎 is a hieroglyph of the action to open the door by hand and say something, meaning “open”, “start” and “the vanguard of troops”. He might have tried to show his loyalty to Uesugi family to be a vanguard of troops and win battles. The kanji 啓次郎 was found in his diary called Maeda-Keiji-Dōchūnikki 前田慶次道中日記. The kanji 利貞 was found in the poems to Kameokamonjyu temple 亀岡文殊奉納詩歌.

After he retired, he got sick and called himself  Ryukotsuken-Fubensai 龍砕軒 不便斎, meaning “a man who once had power to destroy even a dragon but now useless”. He died around 70 years old.

The name of Maeda Keijirō Tosihiro 前田 慶次郎 利大 was found in a Ukiyo-e published by Ochiai Yoshiiku in the end of the Edo period, around 200 years passed after his death.